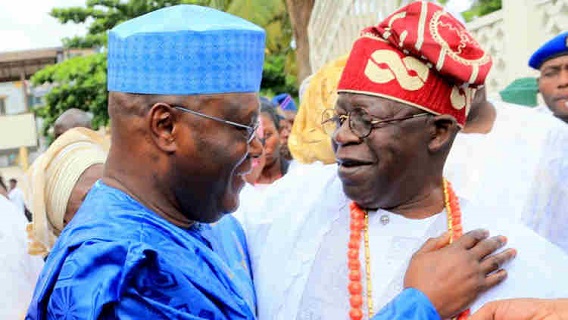 Atiku Abubakar, the presidential candidate of the opposition Peoples Democratic Party, has lauded the victory of his imminent rival, Bola Tinubu.

Atiku made this congratulatory message through a tweet, on Wednesday, June 8.

This was in the aftermath of Tinubu’s victory at the presidential primaries of the APC.

Tinubu was announced as victor on Wednesday, June 8, in a keenly-contested primaries during the special convention of the ruling party at the Eagle Square in the nation’s capital, Abuja.

A total of 2,322 ad-hoc delegates were drawn from the 35 states and FCT to participate in the primary to elect the APC flag bearer out of the aspirants jostling for the ticket. However, only 2,203 delegates were accredited to vote.

Tinubu polled 1,271 votes to emerge as the clear victor.

In his tweet, Atiku said, “Congratulations, @officialABAT, on your emergence as your party’s presidential candidate. It has been a hard-fought contest, but that you prevailed confirms your tenacity. -AA”

Peter Obi was speaking in the backdrop of the ruling party’s upcoming presidential primary, in which 23 candidates are vying to succeed President Muhammadu Buhari in 2023.

In the middle of the process, nine candidates dropped out and campaigned for Bola Ahmed Tinubu, the party’s national head, in accordance with the notion of zoning the president to the country’s southern region.

Peter Obi, however, charged Nigerians to prioritize experience and passion of aspirants for the development Nigeria deserves.

The tweet reads: “Dear Nigerian youths, as you listen to the aspirants of the ruling party jostle for their party’s ticket. Think and ask if they can offer tomorrow what they couldn’t provide in seven years; and if you’re doing better than you were seven years ago.”