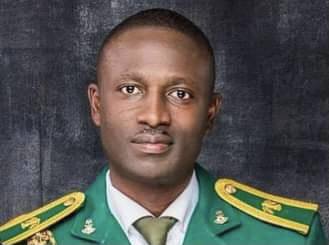 The Nigerian Army has rescued Major Christopher Datong, a ranking officer who was kidnapped by bandits during an attack on the Nigerian Defence Academy (NDA) in August.

Scores of bandits were also reportedly killed during the operation to rescue Datong.

4wardwego blog reported that Major Datong had been abducted by bandits during a bold attack on the NDA located in Kaduna; which left a number of other officers dead. The bandits had subsequently been involved in negotiations with the family of the kidnapped officer for the payment of a ransom.

It remains unclear what came out of the negotiations; especially as Datong had remained in the custody of his captors.

However, Nigerian Army troops had rescued the abducted officer on Friday, September 17, 2021.

Idimah revealed that Datong had sustained a minor injury in the rescue operation. However, he added that the mission led to the destruction of several identified bandits’ camps in Afaka-Birnin Gwari areas. Also, he disclosed that scores of bandits were killed during the operation; which, he stated, took place in the late hours of September 17, 2021.

In addition, the Army scribe had revealed that the Division; in conjunction with the Air Task Force, Department of State Services (DSS)  and other security agencies; had swung into action by conducting operations in the Afaka general area to find and rescue the officer; after a directive by the Chief of Army Staff.

“The troops arrived at a camp suspected to be the location where Maj CL Datong was being held. At the camp, the troops exchanged fire with the bandits and overwhelmed them with superior fire.

“In the process, the gallant troops were able to rescue the abducted officer. However, the officer sustained a minor injury but has been treated in a medical facility and handed over to NDA for further action,” he said.

The Army commended other sister agencies; including the Nigeria Air Force (NAF), DSS, the Nigerian Police Force (NPF); as well as other Nigerians for their contributions towards the success of the mission.