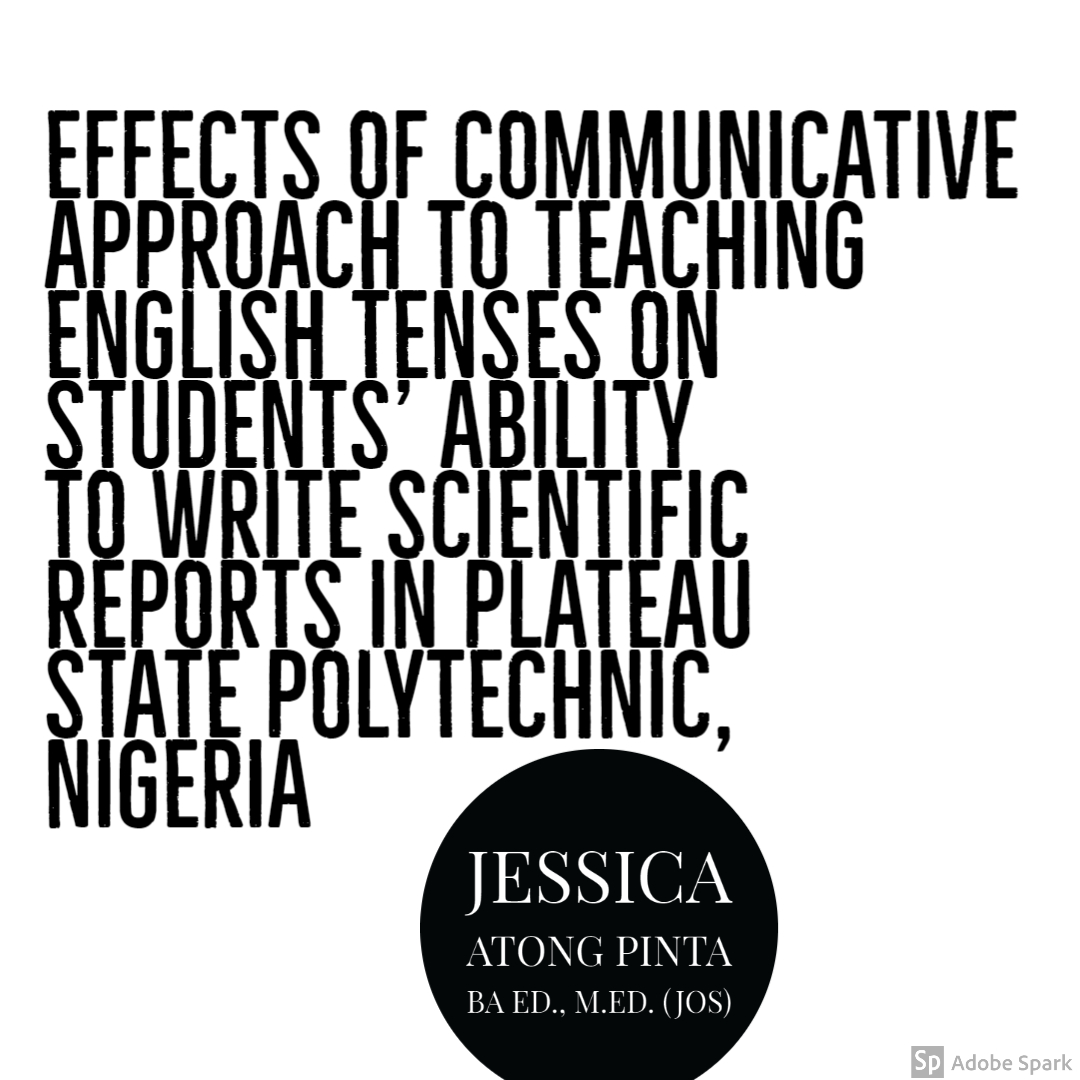 A thesis in the Department of ARTS EDUCATION,
Faculty of Education,
Submitted to the School of Postgraduate Studies,
University of Jos, in partial fulfilment of the
requirements for the award of the degree of
DOCTOR OF PHILOSOPHY in ENGLISH
LANGUAGE EDUCATION of the
UNIVERSITY OF JOS

Students of science and technology are engaged in carrying out different tasks using language. They among others, describe experimental procedures, events, processes, or objects. They are equally engaged in reporting results and conclusions of experiments. The critical language element that is used to convey these tasks is the verb. The verb is what makes the sense of a sentence complete and it has tense and voice as its property.

In addition to the tasks the students are engaged in carrying out using language, scientific writings or technical reports follow a specific format meant to present information that is clear, accurate, concise and factual. In particular, science and technology reports are characterized by exactness, precision impersonal use of language and brevity. For this reason, the students need to be able to use language elements that will not only help them carry out their various tasks, but also help them in presenting information that is clear, exact and impersonal.

Among the language elements that express exactness particularly of time sense and impersonal use of language, are tense and the passive voice. Tense and voice go hand in hand and are dominant features of the English verb which is an obligatory element in a sentence. In addition, tenses are grammatical items that are needed in order to master different text types (Richards, 2006). Besides, the simple present, the simple past and present perfect account for approximately 80 percent of the verb tense used in academic writing (Writing Center 2014). In addition, tense choice is the communicative repertoire of scientific writers which they use to create and communicate information and which is responsive to the rhetorical demands of communicating about science (Liddicoat, 2004). Tenses identified as commonly used in science and technology are simple present and simple past tense.

In science and technology, the actor is not as important as the situation or the thing being acted upon as such, the passive voice is predominantly used. Wrong use of tenses and voice can create ambiguity. This is unacceptable and can trigger serious reactions or even criticisms. This is because tenses have both temporal and rhetoric functions as such, a reader of a scientific write up or a listener of scientific discourse can infer context from the way tenses are used. Without a proper understanding of how to use the tenses, information will be presented wrongly and there will be difficulty in distinguishing between an author’s own opinion and what is accepted in scientific knowledge as universal truth.

Despite the demand for students to properly master the use of tenses and the passive voice, students have, according to research (Murthy, 2007) and practical classroom experience of the researcher, continued to demonstrate difficulty in the use of tenses both in the active and passive voice. This is not unconnected with ambivalent rule application in the use of tenses. Difficulty encountered is also because of the various morphological forms of the English verb which renders some as regular and others as irregular (Aje, 2009). In the case of the passive voice, problems arise because of the subversion of the normal reader expectation that fits the common English order of subject, verb and object (Murthy, 2007). In addition to this, is poor teaching methodology (Aje, 2009).

The language course for students of polytechnics is meant to provide the students with necessary skills which will enable them to cope with the challenges of their courses and be able to use grammar items in their everyday communication (NBTE, 2004). However, from the course syllabus, tenses and other language items are supposed to be taught communicatively based on the goal of the language class but there is inconsistency between the approach being used and the course syllabus. This is in addition to the fact that the language course syllabus is general and does not address specific needs of the students.

Though the Communicative Approach is basically a fluency development approach, competence in the use of tenses and the passive voice which is an accuracy skill plays an important role in the overall communication process. Teachers have observed that communication especially in a second language is difficult for students with low grammatical competence even though they are equally quick to observe that higher grammatical competence does not necessarily guarantee better communication in the target language (Lee & Wang, 2002). Moreover, research is inconclusive as to whether the Communicative Approach is more effective than other approaches, especially in the teaching of tenses in relation to scientific report writing, hence the need for more investigation.