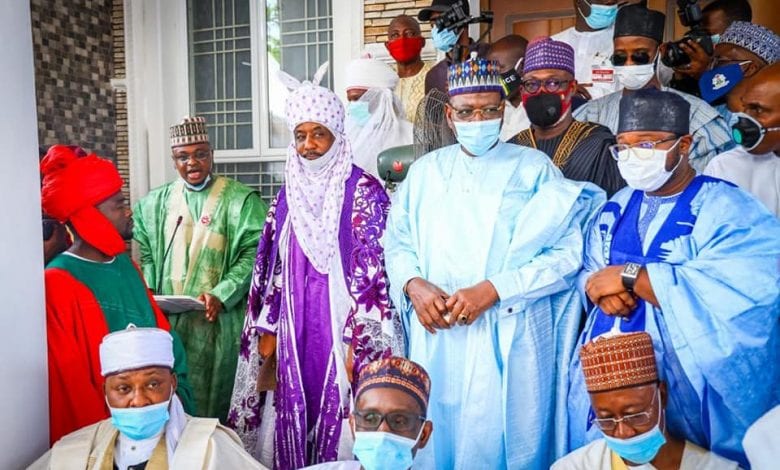 It was a gathering of Nigeria’s elite at the wedding Fathia of Bashir, son of Kaduna State Governor, Nasir El-Rufai on Saturday.

4wardwego reports that the wedding was held in Abuja.

Among the bigwigs who witnessed the tying of the knot between Bashir El-Rufai and his wife, Halima; daughter of an ex-Jigawa state senator from Jigawa state, Ibrahim Kazaure, were a number of Northern state governors. They include Governor of Jigawa State, Badaru Abubakar; Yobo State Governor, Mai Mala Buni; Kano State Governor, Abdullahi Ganduje and Sokoto State Governor, Aminu Tambuwal.

Meanwhile, 4wardwego  reports that Bashir El-Rufai had recently come under fire from some of his kinsmen for posting pictures of his wife on Twitter.

According to these critics, these pictures of Bashir El-Rufai and his wife are ‘inappropriate’. Equally important, this development comes in the wake of the criticism of the Kannywood actress; Rahama Sadau’s picture who was admonished to remember the culture of the Islamic religion.

However, Bashir El-Rufai, in a tweet, blasted the ‘stupid’ opinions on his pictures and that of his wife.

“If my pictures with my wife does not sit well with some & due to the various unsolicited opinions, I’d just like to use this opportunity to say that they are very stupid & if there’s any other way these pictures can make them feel worse than they already do, please let me know,” he said.

Below are more pictures from the well-attended wedding.