#EndSARS: Tension in Lagos as EndSARS memorial protests set to go on 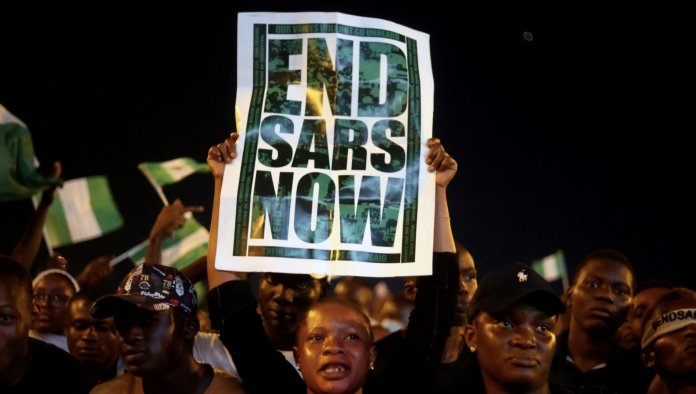 A sense of trepidation and tension hangs in the Lagos air as the anniversary of the October 20, 2020 #EndSARS debacle at the Lekki toll gate dawns.

4wardwego Blog reports that this day last year witnessed one of the most controversial and still hotly-contested events in recent Nigerian history.

On October 20, 2020, Nigerian youths had converged on the Lekki toll gate in continuation of a protest against police brutality. Nigerian Army troops had been deployed to the scene to disperse the protesters; with the aftermath of that decision still dividing opinions till date. Several accounts claim that the troops opened fire on the protesters, using live rounds; with many killed and others injured – a claim that authorities; including the Nigerian Army, the Lagos State Government and the Federal Government have continued to deny.

One year after, a memorial protest is set to take place at the scene of the alleged incident.

The development, which the Lagos State Police Command on Tuesday warned against, has heightened tension in the state. Tagged a memorial car procession, the planned memorial protest is set to hold today; Wednesday, October 20, at the Lekki  toll gate from 8am till 10am.

Already, a number of celebrities, including award-winning rapper and actor, Folarin Falana, popularly known as Falz; son of celebrated human rights lawyer, Femi Falana; as well as comedian, Debo Adebayo, better kn0wn as Mr. Macaroni, have indicated their decision to join in the procession. The duo took to their verified Instagram pages to share e-fliers of the car procession and the order of programme.

“It is impossible for us not to memorialize our fallen heroes. We will never ever forget. Innocent Nigerian citizens waved flags and sang till they were shot at, injured and killed. We must never forget.

“We’re rolling up in cars tomorrow to drive through the tollgate. We know their way, so a procession of cars is the safest option to minimize police harassment. We will stay in our vehicles throughout. Also, we have rides for people that need it. Each and every one’s safety is very important so please let’s move together,’’ both celebrities wrote on their IG pages while sharing e-copies of the fliers.

But reports has it that the Police is not ready to accommodate any form of physical memorial of the contentious anniversary. Therefore, it has declared a ban on any form of street protest in commemoration of the #EndSARS anniversary in the state. Further, a strong detachment of anti-riot police and other security operatives have since taken over the Lekki toll gate.

A statement signed by the Lagos Police Command’s Spokesperson, CSP Adekunle Ajisebutu, said that a post was being circulated on social media stating that the protest was earlier approved by the police. However, the statement debunked this; adding that the police would only allow an indoor or virtual event for the commemoration of the #EndSARS anniversary.

“Attention of the Lagos State Police Command has been drawn to a post being circulated on the social media; insinuating that the police in Lagos have agreed to allow street protests; in commemoration of the one-year #EndSARS anniversary on October 20.

“On the contrary, the police will only allow an indoor and virtual event in commemoration of the #EndSARS anniversary…We will provide adequate security at the venue(s) if known.

“This is in recognition of the rights of every Nigerian to express his or her interest.

“We wish we could permit such street protests. However, intelligence at our disposal has revealed plans by some faceless groups or individuals to stage an anti-EndSARS anniversary protest in the state the same day.

“In view of the conflicting interests between the pro and anti- EndSARS anniversary groups and threat to cause mayhem; the Command once again warns both groups against any form of street protest between now and October 21 and beyond,” it said.

Significantly, the statement warned that the police would deploy all legitimate means to stop or neutralize the planned protests. Consequently, there are fears that a clash may be imminent; in view of the decision of the protesters to go ahead with a physical memorial.

Meanwhile, the statement by the Police did not hide the fact that it was wary of last year’s events; as the #EndSARS protests threatened to spiral out of control and several police formations were attacked and operatives killed across Nigeria. It acknowledged that citizens had the right to peaceful protests; but added that security assessment had revealed that it would be inappropriate to allow such protests to hold. It said that the command would not stand aloof and allow a breakdown of law and order which the protests may cause.

“To avoid a recurrence of the gory protests of last year during which some innocent Nigerians; including police officers were gruesomely murdered, private and public property plundered and maliciously destroyed.

“The police will not abdicate their responsibility of protection of lives and property by allowing such avoidable incident to happen again in the state. Parents and guardians are admonished to warn their children and wards against participating in the protests.

“Similarly, youths and other individuals or groups planning to take part in the protests are further warned in their own interest to shelve the plan,” the statement added.