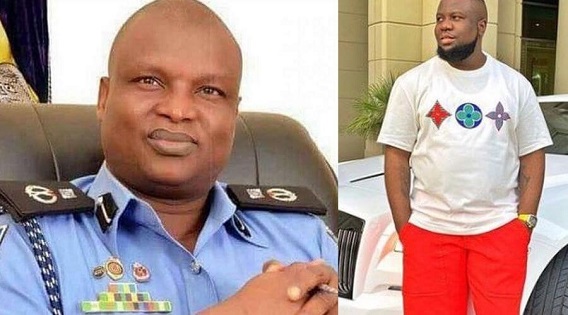 The Federal Bureau of Investigation (FBI) on Monday, August 2, slammed denials by embattled cop, Abba Kyari over the collection of N8m bribe from Ramon Abass known as Hushpuppi, to arrest and jail Kelly Chibuzo Vincent, the internet fraudster’s co-conspirator.

4wardwego blog had revealed how Kyari denied any wrongdoing after a court document exposed how Hushpuppi bribed him to arrest Chibuzo following a dispute over the proceeds of crime.

However, according to the FBI, details of their conversations indicated that Kyari received money to have Chibuzo detained for five weeks upon the instruction by Hushpuppi.

The FBI noted that in 2019, Hushpuppi and his cohorts conspired to take advantage of a Qatari businessperson’s interest in securing a loan meant for a project in Qatar.

Upon receiving the money, Chibuzor with others conspired to create a fake Wells Fargo bank website, a screenshot of which Hushpuppi would send to the victim, to convince him that funds had been deposited into his/her account, in order to fraudulently induce the victim businessperson to make a further payment.

On January 9 and 10, 2020, Chibuzor informed the socialite that he was displeased with the payment he received from the proceeds of their crime and thereafter contacted the businessperson to tell him Hushpuppi was “fake”.

Subsequently, Hushpuppi vowed to set Chibuzo up and contacted Kyari to have his fellow conspirator arrested in Nigeria, for contacting their victim to inform him of their ploy.

Meanwhile, the Muslim Rights Concern (MURIC), on Monday, August 2, rejected the notion about the emergence of a Christian President in the 2023 elections.

MURIC was responding to a statement attributed to the Christian Association of Nigeria, CAN, who had championed the idea.

However, the Muslim body stated that it is not yet time for a Christian to be the President of Nigeria.

Speaking in a statement on Monday, the MURIC Director Professor Ishaq Akintola, said while it is not opposed to the idea of a Christian president for Nigeria, CAN must wait for its turn.

“We believe that it is not yet the turn of a Christian to be the President of Nigeria if we want to go by mathematical exactitude from the time Nigeria began civil rule in 1999,” the group added.