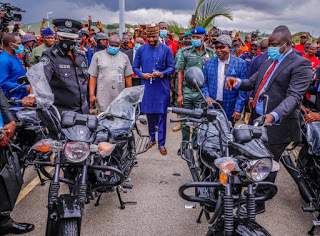 Governor Lalong described the event as a momentous occasion that is aimed at boosting the capacity of security agencies in the State towards tackling criminal activities and resurging attacks on innocent citizens.

He said “to a very large extent and without sounding immodest, we have made giant strides in restoring peace in Plateau State by bringing down the level of insecurity and restoring confidence of the citizens as well as attracting investors, visitors and tourists who continue to troop into the State in large numbers. However, we have also realised that while we consolidate on the peace, the crises merchants are not sleeping as their source of business has been obstructed due to the actions we have put in place to restore stability. Therefore, they are restless and trying various methods to breach the peace.”

Lalong said these criminals have in recent times resorted to isolated attacks in various communities which are carried out in a hit-and-run fashion. In the last two years, such cases were recorded in Kulben, Mangu LGA; Kwatas in Bokkos LGA; Foron in Barkin Ladi LGA; Kwall in Bassa LGA; and recently in Dong in Jos North and Kwi in Riyom LGA among others. While some of the perpetrators have been arrested, others are still at large.

While commending the security agencies for doing their best to tackle such attacks and other criminal activities, he expressed deep concern over the inability to prevent isolated killings or arrest the perpetrators in some cases. He told the police and other security agencies that he does not want to hear unknown gunmen again in Plateau State

Inspector General of Police Ibrahim Alkali Baba in a remark commended Governor Lalong for his efforts at restoring peace and security in Plateau State and also consolidating it with the acquisition of vehicles and providing other logistic requirements for the police and other security agencies.

He assured that more police personnel will soon be recruited to boost the manpower of the force while the training of the personnel is also being accorded serious attention.

Gbong Gwom Jos Da Jacob Gyang Buba appreciated Governor Lalong for his continued support to security agencies,  assuring that the traditional rulers will always give maximum support to all security agencies by mobilising their subjects to gather intelligence.

Over 3,000 Plateau State Joint Civilian Operatives personel were unveiled by the Governor. The IGP also advised them to be involved in intelligence gathering and also pass the same to the security agencies.

Director of Press & Public Affairs to the Governor of Plateau State.