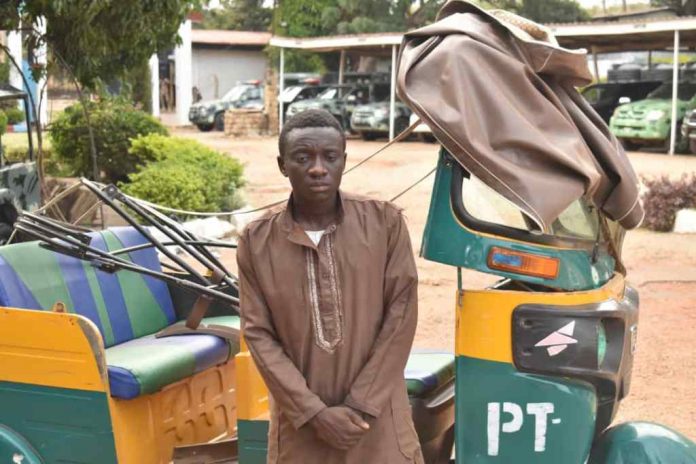 A young man identified as Sani Abdullahi, a tricycle (keke NAPEP) rider who faked his attack and murder which triggered fear and tension in Jos have been arrested by the Troops of Operation Safe Haven

4wardwego Blog gathered that on 1 November, 2021 there was a report by one Alh Abdulsalam Ibrahim from Ali Kazaure area of Jos North that one Sani Abdullahi was killed by youths of Angwan Jarawa in Jos North LGA of Plateau state. That Mr Sani Abdullahi a tricycle driver, while on his way to convey eggs from a poultry located at Angwan Jarawa in Jos North was killed by youths. The tricycle driver claimed that he was attacked alongside his friends and the tricycle snatched from him, while his friends were killed

Troops of Operation Safe Haven and other security agencies were contacted for rescue because the allegation generated tension in Jos. The troops with other security agencies conducted extensive search around Angwan Jarawa where the killing was alleged to have occurred and hospitals in Jos and no information on any injured person who reported for treatment or corpse deposited in any of the hospitals. We also deployed intelligence to continue to monitor the situation and report accordingly.

Mr Sani Abdullahi who was reported to have been killed resurfaced at Ali Kazaure area yesterday, being Wednesday 3 Nov 2021

He was immediately arrested and preliminary investigation revealed that Mr Sani Abdullahi collected the Tricycle (Keke NAPEP) from one Hajia Amina on hire purchase and dubiously attempted to retain the tricycle without paying for it. That is why he claimed that he was attacked alongside his friends and the tricycle snatched from him while his friends were killed.

The Commander OPSH while appreciating the community leaders who helped in dousing the tension in Jos metropolis, wishes to use this medium to call on members of the public to always report criminal elements in their midst and desist from taking the laws into their hands.

OPSH once again assures of its total commitment to the maintenance of law and order on the Plateau without fear or favour.