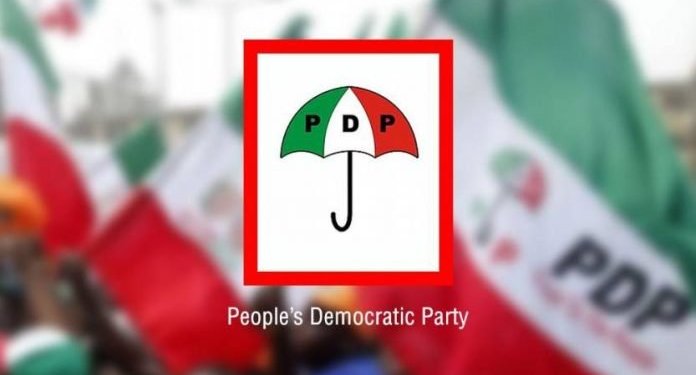 The Peoples Democratic Party in Plateau state has responded to the recently concluded Local Government elections that were conducted in Plateau state which also excluded the participation of the party after the Appeal Court sitting in Jos gave the go-ahead for the said elections.

The party through its State Publicity Secretary, John T Akans, described the Local Government Elections in Plateau State as “the worst local government election in the history of Nigeria” and “the most unfortunate and disgraceful conduct” and “the most horrible act of fascism”.

Akans went on to describe the announcement of winners by PLASIEC yesterday and the action of governor Lalong as executive rascality.

He said “As a party, we are mindful of the fact that the people of Plateau are looking up to the PDP to salvage them from this political despotic and oppressive leadership. It is, therefore, our duty to ensure that the local government election was conducted fairly in the interest of the people who deserve a voice in governance without exclusion” It was on the basis of this that the party went to court to seek justice when Plateau State Independent Electoral Commission unlawfully excluded the party from participating in the election” He said

Gentlemen of the press, our stakeholders, ladies and gentlemen.
I bring you warm greetings from the rank and file of our great party, the Peoples Democratic Party(PDP), Under the leadership of Hon Christopher Adukuchili Hassan.

Today I am addressing you on the most unfortunate and disgraceful conduct of the 9th October 2021 polls, in the name of an election This indeed is the most horrible act of fascism.

As a party we are mindful of the fact that the people of Plateau are looking up to the PDP to salvage them from this political despotic and oppressive leadership. It is therefore our duty to ensure that the local government election was conducted fairly in the interest of the people who deserve a voice in governance without exclusion.

It was on the basis of this that the party went to court to seek justice when Plateau State Independent Electoral Commission unlawfully excluded the party from participating in the election.

Gentlemen of the Press, In the face of this authoritarianism, the party stood firmly against this cruelty, compromise and electoral malpractices which we know was going to be the order of the day across the state as APC and the government have lost their legitimacy baesd on their failure.

It may interest you all to know that it was the resolute stance of the Peoples Democratic Party not to compromise the interest of our people and the integrity of our democratic values by allowing Governor Lalong through his self appointed cronies at PLASIEC to play over the peoples intelligence, that has led to this imperious, and disgraceful show of shame, of the socalled elections of saturday 9th of October 2021, which was massively rejected by the people of the state.

Indeed the people have spoken and have demonstrated that APC is not a political party, but an association of family and friends. The power of the people was clearly displayed in action across the 325 electoral wards of Plateau where majority of the electorates boycotted the exercise over the unlawful exclusion of the PDP from participating in the election by PLASIEC.

We therefore appreciate the people of the state for their protest of the unlawful exclusion of the PDP.
We assure Plateau people that this antics of desperate politicians who are already intimidated and threatened by the rising popularity of the PDP would be vehemently resisted.

To you all our teaming supporters and members of our great party, we urge you all to remain steadfast and committed in the face of this puerilsm.

The announcement of winners by PLASIEC yesterday and the action of governor Lalong can only be described as executive rascality. This is the worst local government election in the history of Nigeria.

In warfare a battle is either won or lost. As a party that respects the rule of law, we are pursuing our course to participate in the local govt elections at the court of appeal. We expect that PLASIEC would have waited for the decision of the court of appeal on this matter. Its surprising to see that PLASIEC that is a party to this suit and was well represented in court, announced its shameful appointees as winners when the matter was adjourned for 22nd of November 2021.

The question that comes to mind is, with this kind of attitude by these people is that, which kind of vacuous, wasteful minds with total disregard for decency and rule of law are presiding over the affairs of our dear state? This desperate act will not salvage the already sinking APC in Plateau State as it has been rejected by all and waiting to be buried in 2023.

Gentlemen, the above scenario paints the picture of lawless mindset of political gangsters who have no respect for democracy, democratic ethics and peaceful process, but only addicted to power without conscience and responsibility.

Governor Lalong and his election merchant team may just be grandstanding in a wild flight of fantasy just for psychological relief in order to give a false hope of judicial victory instead of uncertainty of where the pendulum of justice swings.

So we advice those declared by PLASIEC as winners not to celebrate because they were not elected by the people but rather appointed by despotic leadership and this scam will lead to no where, as plateau people can not be scammed again.
We call on the Independent National Electoral commission, INEC to, inline with the provision of the constitution and electoral act fix a date for the by-election of Jos north / Bassa federal constituency. INEC should come out and tell Plateau why its yet to fix a date for the conduct of this election having lost the member representing that constituency over six months ago.

The Peoples Democratic Party will not hesitate to take legal action against INEC if it fails to fix a date for the election because Jos north/Bassa people are left without a representative for the past six months. INEC has gone beyond the required time to conduct the election as done in other federal constituencies.

In conclusion we wish to assure and encouraged our teaming supporters and the entire people of plateau state that PDP is doing everything possible within the ambits of the law and its competent best to salvage democracy and Plateau from the hands and shackles of political marauders.

PDP is the only party that protect, defend and portrays the values of our founding fathers, we enjoin our people to collectively come and battle along with the PDP and throw out the lalong and the APC government come 2023.

The purported swearing in ceremony is temporal and will be short lived, this is laughable and only a child’s play.

Thank you and God bless you all.