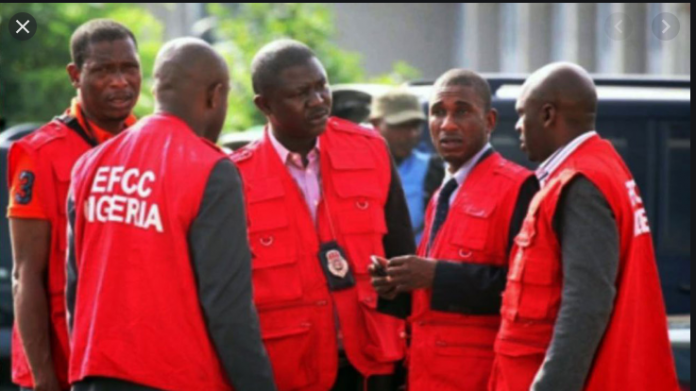 There was apprehension yesterday at the headquarters of Economic and Financial Crimes Commission (EFCC) following the suspension of the commission’s secretary, Olanipekun Olukoyede and 12 directors.

Their suspension was part of the recommendations by the presidential panel investigating allegations of graft and misconduct against the suspended EFCC acting chairman, Ibrahim Magu.

The directors were yesterday directed by the minister of Justice and Attorney-general of the Federation, Abubakar Malami (SAN), to proceed on suspension in compliance with the presidential order.

LEADERSHIP checks revealed that senior staff of the commission yesterday ran from pillar to post consulting on what should be their next line of action as air of uncertainty enveloped the commission over the fate of those who worked closely with the senior management staff following the dramatic turn of events in the last few days.

It was learnt that those who worked closely with the suspended chairman and the directors were worried about being summoned to appear before the panel.

Meanwhile, respite came the way of Magu yesterday as he was released from detention after spending 10 days in police custody. Magu was arrested last week and was taken to the old banquet hall of the presidential villa where he is facing probe over his stewardship as head of the anti-graft agency by the presidential investigation committee.

The suspended acting chairman who was arrested by the

police last week Monday was detained in the Force Criminal Intelligence Department from where he has been appearing before the panel investigating allegations of corruption and insubordination levelled against him.

The Inspector-General of Police, IGP Mohammed Adamu, had said only the presidential panel could order Magu’s release.

The police boss explained that the Nigeria Police Force was not investigating Magu as he was kept in the custody of the Force on the order of the panel.

This was contained in a letter, with reference number CB:7000/IGP.SEC/Abj/Vol.489/171, addressed to Tosin Ojaomo of Ojaomo and Ojaomo Chambers, and signed by the IGP’s principal staff officer, DCP Idowu Owohunwa.

Responding to the demand for Magu’s release, IGP Adamu urged his lawyers to seek for his release from the panel as the police is not investigating him.

Meanwhile, as part of preparation for his defence of the allegations made against him, Magu has written to the presidential investigation committee demanding the charge sheet containing the allegations against him as well as a copy of the memo by the minister of Justice, Abubakar Malami.

“Our client observes that rather being afforded copies of the allegations against him, some of these allegations are flying round on Social Media platforms with prejudicial consequences.

“Our client requests that these allegations be formally served on him to enable him respond to same immediately.

“Our client observes that the Panel has issued official statement to the effect that it did not authorise the detention of our client. We request the Panel to recommend to the Inspector General of Police in whose custody our client is to release him from custody to enable him adequately prepare his defence and attend to his failing health. We plead with the authorities to release our client from custody”.

Magu also noted that some of the false publications being orchestrated in the media, including report that NFIU had submitted report on Magu’s forex transactions to the panel, were false.

The letter noted: “Our client states categorically that he has not been confronted on alleged illegal transactions and no such report was tendered by NFIU in any proceedings before this panel involving him till date.

“Our client states categorically that the maximum forex transactions he has been involved in is the sum of $10,000  till date. Our client also wishes to place on record that he has no link with Kaduna-based Bureau De Change Operator as erroneously reported in the publication”.

“This allegation is outright falsehood and is denied by our client in unmistakable terms.

“It is instructive to state that the General Overseer of Divine Hand of God Prophetic Ministries, Prophet Emmanuel Omale, in a pre-litigation letter addressed to News Agency of Nigeria (NAN), on Monday 13th July, 2020, denied the allegations that he bought a property in Dubai worth N573 million on behalf of our client. Our client challenges his accusers to provide details of such property and proof of ownership by our client. Instructively, The PUNCH at Page 8 of Tuesday July 14th, 2020 had published the denial of Prophet Emmanuel Omale to set the record straight”.

On alleged diversion of N700million Training Fund, Magu said, “The allegation that this Panel requested our client to account for the sum of N700 million meant for the commission’s operatives is not true. Our client has not been confronted with such allegation by this Honourable Panel. Our client does not disburse any such funds in the EFCC. The immediate Director of Finance and  Administration (DFA) summoned by the Panel must have furnished details on this as the custodian of the funds.

“Our client denies this allegation completely. Funds earmarked for training was properly utilised by the Commission. The DFA and the Director of Audit will explain the utilisation of the funds meant for training with supporting documentations”.

Magu further described the allegation that there were plans by some of his associates to spirit him out of detention as complete fabrication.

The letter stated: “Since our client has been in detention nine days ago, he has cooperated maximally with law enforcement agents. Our client is only allowed very few restricted and fully screened visitors.

“No such incident took place as reported and this is an attempt to bring our client on collision course with the authorities he respects enormously. Our client, as a commissioner of police, will never escape from custody as he remains innocent and a patriotic citizen”.

On alleged payment of N4billion to Vice President Yemi Osinbajo, Magus said nothing could be farther from the truth.

He regretted what he termed the falsehood against the vice President, saying he has never given the sum of N4 billion or any sum at all to Osinbajo.

He said, “This allegation is complete falsehood designed to tarnish the hard-earned reputation of the Vice President and our client”.

On alleged payment of N28million to Femi Falana, Magu’s letter noted: “This allegation is complete fabrication. Our client never gave N28 million or any amount to Mr Femi Falana as maliciously reported. Our client also denies any link with a Kaduna-based Bureau De Change Operator as alleged”.

On the reported search of his house, counsel to Magu said, “Our client confirms that his house was searched last Monday in his absence while in custody, but no incriminating evidence was found. It is untrue as reported that some dollars and expensive jewelries and wrist watches were found. Our client states that the search into his house did not reveal any incriminating evidence or materials. The cars removed from his residence were official vehicles assigned to our client as acting chairman of EFCC.

“Funds released by INEC to EFCC were disbursed directly to the beneficiaries who participated in the electoral process. This information can be verified from the INEC Chair, the Director of Finance and Administration EFCC and Director of Audit respectively.

“Our client has absolutely nothing to do with the sum disbursed as Electoral Fund and never benefitted from the disbursement. The story is complete fabrication designed to tarnish the image of our client”.

“Our client denies any link in the alleged burgling of the office of the Nigerian Financial Intelligence Unit (NFIU), located at No 12, Ibrahim Taiwo Street, Aso Villa. Our client has no link with the Kaduna-based Bureau De Change (BDC) as reported. Our client states that an attempt to link him with the burglary or the Bureau De Change is a cheap blackmail. Our Client calls for investigation to unravel the truth”.

He said, “In the interrogation of our client so far this has never featured even if the head of Assets Forfeiture of the EFCC has appeared before the Penal. Our client has also not been given a copy of the report of the Presidential Committee on Audit of Recovered Assets (PCARA). This publication is complete fabrication.

“The truth is that EFCC under our client’s watch is ready to respond to this allegation if obliged a copy of PCARA.

There has been no mismanagement of and certainly, there is no lack of transparency in the management of recovered assets under the leadership of our client”.

In a related development, the National Youths Council Of Nigeria (NYCN) has condemned the series of attacks on the attorney-general of the federation and minister of Justice, Abubakar Malami (SAN), noting that it was the handiwork of selfish politicians who want to rubbish the anti-corruption war of President Muhammadu Buhari.

National President of NYCN, Solomon Adodo, at a press conference yesterday in Abuja, decried what he termed a series of sponsored stories that have trailed the suspension of Magu, stating that while most of the reports were outright lies, others were deliberate falsehood.

He said, “The first group of these people not only aimed to rubbish the determination of President Muhammadu Buhari to rid the country of systemic corruption, but also to destabilise his government so that an eventual takeover is guaranteed.

“They began by insinuating that if Magu is guilty of corruption, it means the president has altogether lost it. In fact, they claim that for government to have allowed him stay this long, it means the anti-corruption fight is a charade. But this notion is laughable because it is the same government of Buhari that is probing him now.

“Another group has focused their attention on the star chief law officer of federation, the Attorney-general and minister of Justice,

Mr. Abubakar Malami, SAN. Their own antics are infantile, comical and full of delusions that one is forced to pity them.

“You may have seen a building which they claim Mr. Malami built for his son. And you may have read of other properties which they unsuccessfully tried to link him to. These have all been found to be nothing other than merchandise in falsehood”.

Adodo further said Magu’s travails was evidence that the fight against corruption is on a good course, stressing that some people who the president trusted with sensitive assignments may try to sabotage him.

“But none will escape when found. That is what the anti-corruption crusade and policy is all about. We thank Mr. President for remaining very committed to this fight. It is a fight to save our future as youths, and we deeply appreciate it,” he said.