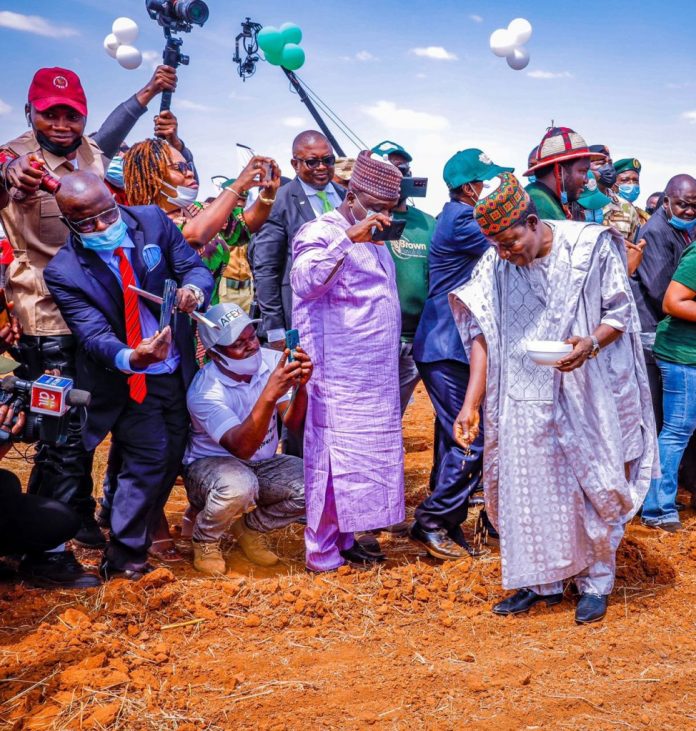 President Muhammadu Buhari on Tuesday 9th November 2021 flagged off the first ever rain fed commercial wheat cultivation in Nigeria at the Wheat Seed Multiplication Farm in Kwall, Bassa LGA of Plateau State with a charge to Nigerian farmers to embrace wheat farming and stop the import of the product which gulps over 2 billion dollars annually.

President Buhari who was represented by Plateau State Governor Simon Bako Lalong at the launch noted that the Agricultural sector is one of the critical non-oil sectors which has made significant contributions to the Gross Domestic Product (GDP) accounting for a 22.35 and 23.78 per cent contribution to the overall GDP in the first and second quarters of 2021 respectively.

He said a key focus of his administration has been the deployment of mechanisms to ensure that agriculture thrives in Nigeria to significantly grow the economy and achieve maximum welfare for the citizens by ensuring food and energy security.

Buhari said Nigeria is on the path to actualizing sustainability in the production of rice, maize, cassava, soybean, groundnut, oil palm, cocoa and very soon the breakthrough in wheat cultivation in Nigeria will be accomplished.

He however lamented that Nigeria still spends humongous amounts of money on wheat import which is not acceptable because the country has the capacity to meet domestic consumption demands and also export.

He said “It is important to stress that Nigeria currently spends over $2 billion on the importation of wheat annually, one of the key contributors to the Nation’s huge foreign import bill. This is because millers have had to resort to importing wheat to meet the huge demand for wheat by-products. Wheat cultivation, similar to rice has the capacity to thrive in Nigeria due to the tropical climatic conditions. Currently, wheat is cultivated in many Northern states particularly in the dry season due to the high heat tolerance of the seed utilized by farmers”.

The President expressed excitement for the flag-off of the 2021/2022 dry season wheat farming noting that wheat can also be grown in the wet season in Plateau State as research also shows that it can be cultivated in other Plateaus in the country, namely, Gembu Plateau, Taraba State and Obudu Plateau, Cross River State. He urged these states to take advantage of this opportunity and key into the initiative.

The President commended the Central Bank of Nigeria, for using the Anchor Borrowers Programme not just in the Agric value chain, but in almost all sectors of the economy as shown in the recent launch of some transformative initiatives like the 100 for 100 policy for production and productivity.

CBN Governor Godwin Emefiele represented by Deputy Governor Edward Lamtek Adamu said in order to change the situation and leverage domestic production to bridge the demand-supply gap in the country, the Central Bank of Nigeria decided to add wheat to the list of focal commodities to be supported under the Bank’s agricultural intervention programmes.

He also assured that the two-pronged approach of seed multiplication and grains production which has been adopted is expected to sustain the propagation of seeds and guarantee availability of high-yielding seeds to farmers.

The CBN Governor said “the event heralds the commencement of the Brown Revolution Journey, which is the first major wet season wheat production in Nigeria with about 700 hectares put under cultivation in Kwall, Kassa, Jol, Kafi Abu and Sop in Jos, Plateau State. While the short-term implication of this is the addition of about 2,000 metric tons of seeds to our national seed stock, the country can now potentially add 750,000 metric tons of wheat to the nation’s output annually through rain-fed wheat cultivation in Plateau, Mambila Plateau and Obudu Plateau. The CBN will not rest on its oars as we continue to work with our partners, Lake Chad Research Institute (LCRI), to expand the frontiers of wheat production in Nigeria to areas like northern Oyo, Kogi and Kwara states”.

Rt. Hon. Yakubu Sanda said the people of Plateau State welcome the initiative and will do everything possible to sustain it for the benefit of youths, women and men who are in need of jobs and resources to meet the daily needs of life.

The Commissioner for Agriculture and Rural Development Dr. Hosea Finangwai, Gbong Gwom Jos, Da Jacob Buba, President of Wheat Farmers Association, Salim Mohammed, and the DG Lake Chad Research Institute, all commended the initiative by the Federal Government and said the people need to own the process by ensuring that middlemen do not hikack the initiative for profit, leaving them to wallow in poverty.