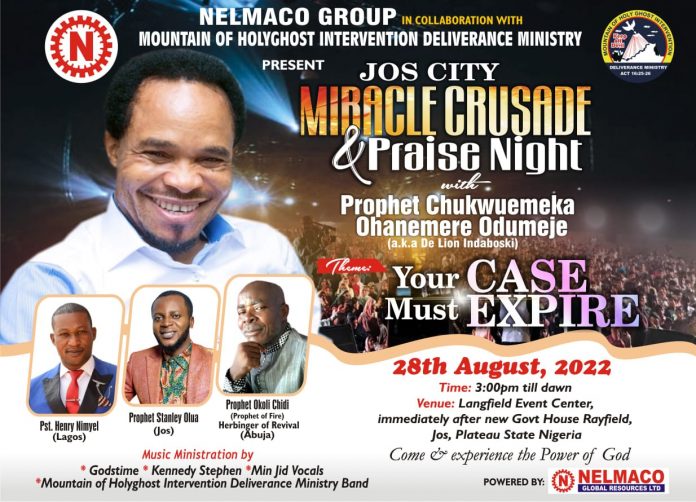 Popular Prophet and Pastor, Chukwuemeka Ohanemere popularly known as Odumeje will be storming the city of Jos on the 28th of August, 2022.

He is the senior pastor of the popular pentecostal church; Mountain of Holy Ghost Intervention And Deliverance Ministry in the South East region of Nigeria. Onitsha, in Anambra to be precise.

The prophet who’s known mainly for his miracles, signs and wonders and radicality in ministry has finally agreed to host a mega crusade in Jos after being persuaded for almost two years by Amb. Nelson Mkparu, CEO of Nelmaco Group PLC Ng.

His works have gone abroad as he has hosted several crusades outside Nigeria and this time, he has decided to visit Jos, Plateau State for the first time. What does it mean? Revival? Blessings? Breakthrough? You think about it!

The Crusade which is tagged, “Your Case Must Expire” promises to be power packed as the prophet has said that he’ll focus in praying for Plateau State, the government, Land and the people of the state.

Recently, the Prophet has been trending online for so many reasons but he’s still not relenting in doing the work which he was called to do. It hasn’t deterred him from being focused on the goal.

The internet has been littered with so many news about this latest development but all thanks to Amb. Nelson Uba Mpkaru, who has decided to take it upon himself to see that this crusade holds.

This should be your time to witness God’s presence in it’s real form. Healing, deliverance, salvation, supernatural financial turnaround etc.
Come and watch your problems expire!