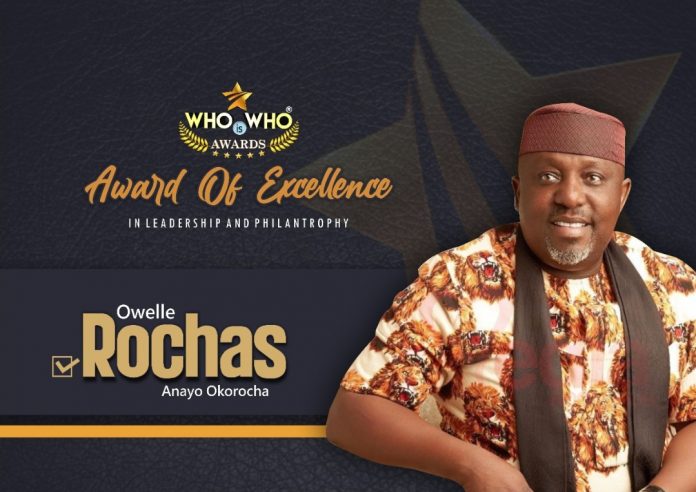 Who Is Who awards and Magazine is set to honor Senator Rochas Okorocha as one of Nigeria’s notable philanthropists in its bid in recognizing top individuals who are positively impacting society and the country at large.

Speaking earlier to Journalist, International President of Who is Who Awards and Magazine, Mrs. Binta Perl Ojoma, said the organization is driven by the passion for showcasing individuals, businesses and organizations. She said the organization has keenly followed the activities of Senator Rochas Okorocha after his name came up severely through their nomination processes.

Mrs. Ojoma said the former Governor and current senator representing Imo West, Imo State, Nigeria has demonstrated that he is indeed is a man with a heart of gold and compassion as his persona is made up of his commitment to philanthropy.

“Owelle Rochas Anayo Okorocha has shown remarkable excellence in all spears of life as one of Nigeria’s multi-billionaire, education philanthropists, politician, an astute businessman, A man who has set his sights on providing free education to 1 million children across the African continent by the year 2030”

“We, therefore, are pleased to award recognize his inculpable efforts in Nation-building with an Award of Excellence in Leadership and Philanthropy,” she said

Who is Who Award and Magazine will deliver the Ceremonious Award of Excellence to Senator Rochas Okorocha in Abuja today with over Seven thousand copies of an exclusive business directory (The Who Is Who Magazine) distributed across the federation. The Award organization will be celebrating Senator Rochas’s irreproachable contributions and achievements which it hopes will encourage others to raise their leadership quality and service standard, hence economic growth.