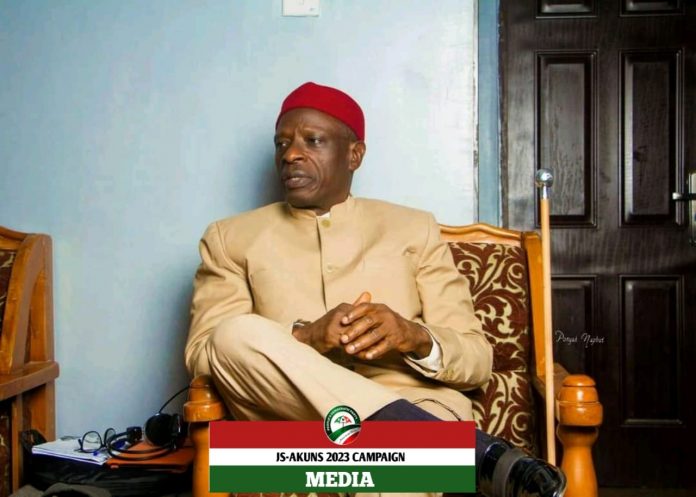 Chief Jonathan Sunday Akuns has said that his sights are set on restoring the dignity of human life by reviving the peace and prosperity of Plateau state come 2023.

Chief Akuns popularly known as ‘The Galadiman Dafo’ who is one of the gubernatorial aspirants in Plateau State under the umbrella of the People’s Democratic Party (PDP) disclosed this during an online discussion “Meet Your Guber Aspirant” by the Plateau Bloggers and Online Media Association, PLABOMA.

He stated that one of his Mission is to focus on Rule of law for nation-building where he can optimize the efficiency and effectiveness to safeguard occupational traders, delink and de-escalate violent, crimes. He said as an economist and business-oriented individual, he also sees livestock as an opportunity for the state to key into for commercial purposes. He pointed out that livestock breeding as an occupational trade competes for the utilization of Land with crop farming for certain residents of Plateau.

Chief Akuns also want to focus on security, economic empowerment and education. He stated that the welfare purity of citizens, when we talk in terms of security, one will realize that in Plateau for the past 20years or so, the major source of insecurity and loss of lives and properties seems to emanate from livestock breeding. In other to deal with such is by creating an incentive framework that takes people away from pursuing crime.

He further disclosed that we could choose to replicate poultry farming practices in livestock breeding and hold awareness, and discussions with critical stakeholders to understand the need to domesticate every single species of livestock.

Considering the 3 Factors of production Land, Labour and Capital, Chief Akuns elaborated that land doesn’t expand even as the population increases, as Modern production as the exchange of goods and services becomes more sophisticated because of the advancement in science and technology. The tendency is for each corporate trader to seek to optimize production since land is the only resource that needs to be utilized for occupational trade.

By implementing The rule of law, Chief Akuns narrates that when a crime is committed along the path of achieving production or exchange of goods and services, the crime will be apprehended to face justice but the current practice is one in which one law serves all. So it gives room for certain occupational traders to get away with the crime because there is no limiting defining law to engage and prosecute them.