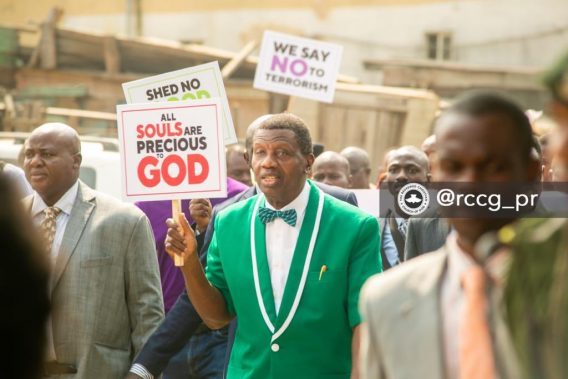 The General Overseer of The Redeemed Christian Church of God, Pastor Enoch Adejare Adeboye on Sunday; led millions of his church members on a prayer walk to end the spate of insecurity and killings in Nigeria.

Adeboye, who had instructed his church members all over Nigeria to observe the walk; commenced the walk from Ebute Meta to Atan Cemetery in Yaba metropolis and back.

The Christian Association of Nigeria had declared a three-day fasting and prayer; to strengthen the military forces in their fight against terrorism and insurgent activities in the country.

CAN President, Dr. Samson Ayokunle, had said the exercise would end with a prayer walk today, February 2nd, 2020.

Some of the placards they carried had the inscriptions such as; “Every life matters. All souls are precious to God. Shed no blood. It cries to God. Stop the killings now.”

Meanwhile, the Nigerian Twitter space has exploded with reactions from Nigerians after a series of tweets from renowned man of God; Pastor Adeboye Enoch, went viral on Wednesday, January 29, 2020.

Specifically, Pastor Adeboye, the General Overseer of the Redeemed Christian Church of God and a highly respected man of God; had taken to micro-blogging site, Twitter to share some nuggets with married couples.

‘‘Crush that crush,’’ Pastor Adeboye had begun in a long Twitter thread which featured a picture of his wife.