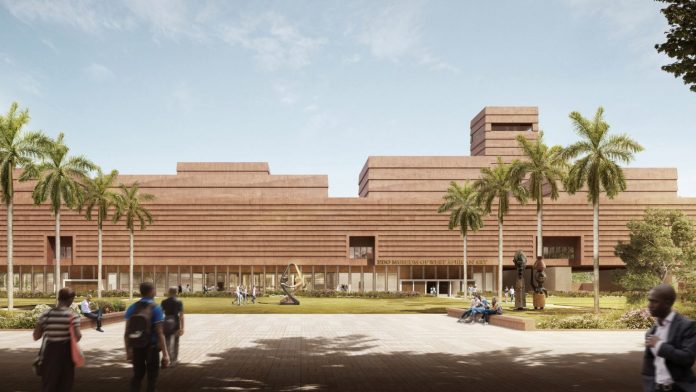 The arrangement of the proposed new museum dedicated to West African art in Edo State will be based on the ruins of the ancient Benin City kingdom.

This was disclosed by Adjaye Associates, the architecture studio, responsible for the construction of the new museum.

Named the Edo Museum of West African Art (EMOWAA), the museum will be cited in the centre of Benin City; next to the palace of the Oba of Benin. The project forms part of an initiative being led by The Legacy Restoration Trust; as well as the British Museum to showcase the history and archaeology of the former Kingdom of Benin, Dezeen reports.

The new museum will be home to historic art and artefacts as well as galleries dedicated to contemporary arts. Also, it will feature archaeological remains found during construction of the new structure. In addition, it may include reconstructions of the structures that formerly occupied the site.

The first floor will contain seven galleries with raised ceilings.

David Adjaye, founder of Adjaye Associates, says the new museum will raise the bar in Africa.

“I am humbled and deeply inspired to design the new EMOWAA; a project that will establish a new museum paradigm for Africa. From an initial glance at the preliminary design concept, one might believe this is a traditional museum. But, really, what we are proposing is an undoing of the objectification that has happened in the West through full reconstruction.”

Meanwhile, Adjaye revealed that the concept building consists of a two-storey block; with seven gallery spaces on the upper floor and service spaces, offices and auditoriums on the ground floor. Each gallery will each have high ceilings that extend from the main building. These would appear like a series of pavilions from the building’s exterior. Further, the museum will also contain a taller tower that will be a viewpoint.

Equally important, Adjaye reiterates that the building’s arrangement is derived from the ruins of the historic city.

“Applying our research into Benin’s extraordinary ruins, the city’s orthogonal walls and its courtyard networks; the museum design reconstructs the inhabitation of these forms as pavilions that enable the recontextualisation of artefacts.

“Decoupling from the Western museum model, the EMOWAA will perform as a reteaching tool –  a place for recalling lost collective memories of the past to instil an understanding of the magnitude and importance of these civilizations and cultures.”

Construction of the museum is planned to happen after a five-year archaeology project takes place on the site and its immediate surroundings to investigate the former capital of the Kingdom of Benin.

The kingdom was one of the most significant pre-colonial states in West Africa before it was conquered by the British in 1897 when large areas of Benin City were destroyed. The city was known for castings in brass and bronze called Benin Bronzes; many of which are now in the British Museum. All finds from the archaeological excavations will become part of the EMOWAA museum collection and will remain in Nigeria.

Adjaye Associates was established by British-Ghanaian architect David Adjaye in 2000.