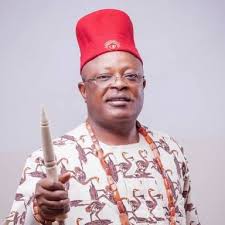 Ebonyi State Governor, Dave Umahi, is all but set to dump the Peoples Democratic Party (PDP) for the All Progressives Congress (APC).

The development was confirmed by Chief Elias Mbam, a chieftain of the APC in Ebonyi.

4wardwego reports that Mbam had urged Gov. Umahi to move ahead with his plans to defect to the APC. Mbam, who is also the Chairman, Revenue Mobilisation, Allocation and Fiscal Commission (RMAFC); disclosed this while speaking with newsmen on Monday in Abakaliki.

Equally important, he was reacting to a meeting held between the governor and some APC stakeholders on Sunday. The meeting was held in Uburu, Ohaozara Local Government Area (LGA) of the state; preparatory to his defection to the party.

Mbam hailed the decision as a welcome development; even as he held that Ebonyi and the South East would benefit from the defection. He added that the South East had nothing to show for its numerous support for the PDP since the return to civil rule in 1999. However, he stated that the APC-led Federal Government has shown commitment towards developing infrastructure in the South East; adding that it was time politicians in the zone moved en masse to the APC.

“The major stakeholders in our party met with the governor…He told us why he wanted to leave his party for the APC. Part of the reasons was the need for South East to be part of the government at the centre.

“He stressed the need for the zone to collaborate with the North and that if we do that; we will be able to get what we have not been able to get since 1999. Since 1999, PDP has been in control in Ebonyi and other states in South East. Yet, the party has not found one person worthy of flying its flag…We don’t even have any hope that it would happen soon,” Mbam said.

“We want to lead a campaign where the South East will become more relevant at the centre. Umahi’s move is a commendable decision. It’s good for our state and Igbo people.

‘‘The best way to be represented in a meeting is to be present where major decisions are taken…If Ebonyi is not present at the centre, certainly it will affect what we get from there,” he said.

The RMAFC chairman said the defection to the APC by Umahi would further strengthen the unity of the party in the state and reposition it towards capturing the governor’s seat in 2023.