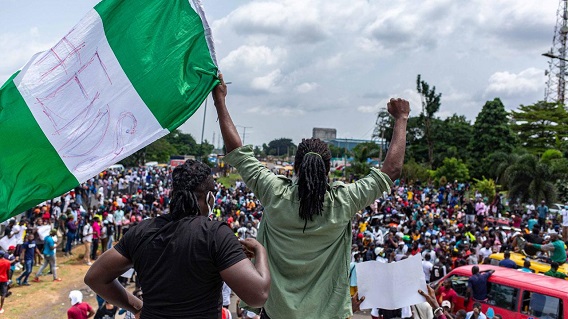 The Federal Government on Thursday, November 19, revealed the conduct of policemen and soldiers during the #ENDSARS protests and the attendant violence deserves commendation and not condemnation.

This was contained in a statement issued by the Minister of Information and Culture, Lai Mohammed who stated in Abuja during a televised press conference, stating the government was satisfied with the roles played by the military, police, and other security agencies during the #EndSARS protests.

Mohammed further bemoaned that six soldiers and 37 policemen were killed during the “#EndSARS crisis”, adding that soldiers killed no protester at the Lekki toll gate in Lagos on October 20.

The press conference comes in the aftermath of an investigative report by CNN that some #EndSARS protesters were killed and injured.

Mohammed, who insisted that the soldiers deployed to Lekki were professionals, said the reports indicating that protesters were killed relied on unverified facts from social media.

He also described the reports as demoralising, stating that protesters were killed without stating attacks on security operatives and infrastructure by hoodlums.

He said: “We insist that the military did not shoot at the protesters at Lekki. They fired blank ammunition into the air. Anyone who knows anyone who was killed at Lekki toll gate should go straight to the judicial panel with evidence.

“At this point, it is important to say that the Federal Government is very satisfied with roles played by the security agencies, especially the military, and the police all through the EndSARS crisis. They were professional.

“Even when their lives were at stake, they exercised uncommon restraints. Their professionalism saved many lives and properties.”

Meanwhile, the Academic Staff Union of Universities (ASUU) has implored the Federal Government to show its commitment to revitalisation of public universities in the country.

This appeal was made on Wednesday, November 18, in a statement signed and also made available to newsmen by the Lagos Zonal Coordinator of ASUU, Prof. Olusoji Sowande.

Sowande revealed why ASUU shifted ground; from its initial demands in the interests of Nigerian students who have spent over seven months at home.

According to Prof. Sowande; equally important, ASUU has dumped its initial insistence that the government should release one tranche of N220 billion revitalization fund; and is now demanding for 50% of one tranche (N110 billion).

“In the interest of our students who have been at home for seven months; our union has shifted ground from the in the insistence of a release of one tranche of N220 billion revitalization fund to demand 50% of one tranche (N110 billion) for government to show its commitment to revitalisation of our universities.

“This is a major reason the government has not been able to return to negotiation with our union in the last two weeks,” the statement reads in part.