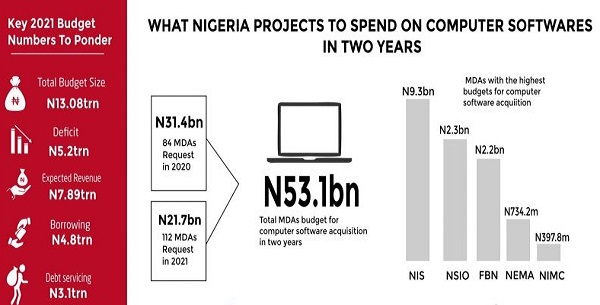 The Federal Government (FG) has revealed that 112 Ministries, Departments, and Agencies (MDAs) requested N21 billion for computer software acquisition in the 2021 budget.

With this budget, this means the expenditure of the FG to N53 billion in two years for the same item.

4wardwego had reported that the request which is contained in the 2021 appropriation bill presented by President Muhammadu Buhari to the National Assembly for approval has, among others, a budget of N218,123m from the National Film And Video Censor Board, and N9.3 billion from Nigeria Immigration Service for computer software acquisition.

However, it was revealed that in 2020, 84 MDAs had budgeted N31 billion for the same item.

The kind of software to be purchased with such a humongous budget remains to be seen; but the State House also plans to spend N87 million for software in two years. This is N62.9 million in 2021 and 24.1million in 2020.

Early in 2020, the National Office for Technology Acquisition and Promotion had said N79.3bn was saved through insisting MDAs make use of indigenous software.

According to Dan-Azumi Mohammed, the Director-General of NOTAP, ”the amount of money spent by the Nigerian government is in excess of $400 million about N15.2 billion annually on foreign software.”

This development has elicited criticisms from the populace who are worried about the annual expenditure to acquire software by ministries.

The 2021 budget, the FG had promised, was designed for economic recovery and resilience.

But not many Nigerians have bought into this; and have taken to social media, describing the 2021 budget as ‘wasteful’; due to outrageous and unnecessary items allocated huge sums even in the face of the economic downturn in the country.

The total amount of 13.8 trillion budget will be financed by N4.28 trillion domestic and foreign borrowing; and also includes personnel cost of N3.76 trillion and debt service of N3.12 trillion.

Nigeria is already due next year for another round of external debt repayment for matured loans put at $2,156,228,000 (N822bn), with uncertainty around the global oil market from where Nigeria receives the bulk of her revenue.

With additional notes from Ripples Nigeria