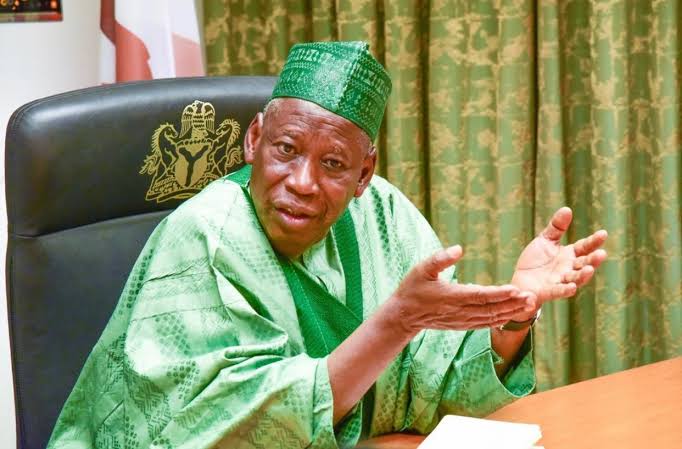 Governor Abdullahi Ganduje of Kano State has commended President Muhammadu Buhari over the introduction of the Special Weapons and Tactics (SWAT) team as part of reforms of the Nigeria Police.

Meanwhile, SARS was disbanded on October 11, a sequel to public outcry and widespread protest by Nigerians over its operations. Adamu announced SWAT as a replacement squad in accordance with Section 18 (10) of the Police Act 2020.

Ganduje lauded the president and the IGP in a statement by his Chief Press Secretary; Mr Abba Anwar, on Wednesday in Kano.

Equally important, the governor commended the action while addressing a coalition of youth groups on a solidarity rally at the Government House, Kano.

Further, the governor commended the youth for cooperating with security agencies to enhance the safety and security of the state.

“We noticed that there are protests in some sections of the country while in Kano. The youth decided to take a good stand by not condemning the police as an institution; rather condemned the few bad eggs among them.

“Without the police, can we move freely in the country?

“We are only calling for the fishing out of the bad eggs among the institution; no more, no less.

“SWAT formation is a good step in the right direction…Reforming the police institution is what our youth are agitating for.

“We commend you for the maintenance of law and order in the state,” Ganduje was quoted as saying in the statement.

Also, the statement  quoted Mr Khalid Sanusi, the National Coordinator, Coalition of Youth Groups; as saying that the events in the past days had brought a policy twist in the nation’s security system.

Specifically, Sanusi commended President Buhari and the IGP for the prompt response. Also, he hailed the gallant efforts of the youth to voice genuine concerns for a better policing orientation in the country.

He said the rally was to show their support of the planned reform of the police; adding that practical steps were necessary to successfully reform the police.

This, he said, could be achieved through adequate funding and provision of equipment to enable the police to operate in accordance with international standards.

He said: “We believe FSARS, which had helped to reduce criminal activities in the country; created as a unit in the police force with noble anti-robbery intentions.

“We hope that the police authorities, as promised by the IGP, will re-evaluate, restructure, rebrand and rebuild confidence in an efficient and effective anti-bribery tactical unit in the force.”

Anglican church suspends Archbishop over affair with a married woman