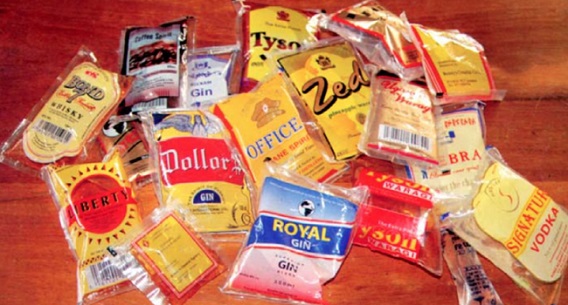 The National Agency for Foods and Drugs Administration and Control (NAFDAC), on Sunday, September 13, announced the imminent prohibition of the sale and consumption of alcohol in sachets and polyethylene terephthalate (PET) bottles.

This was contained in a statement issued by the director-general of NAFDAC, Mojisola Adeyeye.

Furthermore, she explained that NAFDAC and the ministry of health have engaged major shareholders and have reached certain agreements.

She said the food agency will no longer register new products in sachet and small volume PET or glass bottles with contents above 30 percent alcohol by volume (ABV).

“These concerns relate to negative effects of irresponsible alcohol consumption on public health and on the safety and security of the public, alcohol being a toxic and psychoactive substance with dependence producing properties, ”she said.

“In regard to alcohol, major stakeholders have been engaged at the highest level and are already sensitised to the issue.

“To this end, several interventions jointly agreed upon by major stakeholders are being undertaken and as a first step, no new products in sachet and small volume PET or glass bottles above 30 per cent ABV will be registered by NAFDAC.

“Furthermore, to reduce availability and curb abuse, effective January 31 2020, producers of alcohol in sachets and small volume PET and glass bottles are to reduce production by 50 per cent of capacity prior to January 2020.

“The overall goal is a complete phase-out of high concentration alcohol in sachets and small PET and glass bottles in line with the agreed roadmap or earlier.”

Meanwhile, the management of the Niger Delta Development Commission (NDDC) has come under criticism after several Nigerian students studying in the UK universities under its sponsorship said they are still stranded abroad.

This is despite the commission’s claim that it has remitted money for their tuition and stipend.

In August, the NDDC had stated that it approved over $5.9 million (about N2.28 billion) to 197 students; who are of the 2019 batch on its scholarship programme.

The commission said it had also begun the processes for the payment of school fees owed 94 scholarship beneficiaries for the 2018 batch.

However, some of the students – the 2018 batch – have come out to say that the NDDC deliberately excluded them from the payment.

“The NDDC selectively handpicked those it paid without any defined criteria; and is refusing to pay fees; grants; as well as upkeep of 2018 scholars for no justifiable reason whatsoever,” the students explained.

“This came as a rude shock to us; because historically, the NDDC had always paid the fees as well as upkeep of scholars; in the order in which they were incurred; that is, from the earliest to the latest,” the statement added.