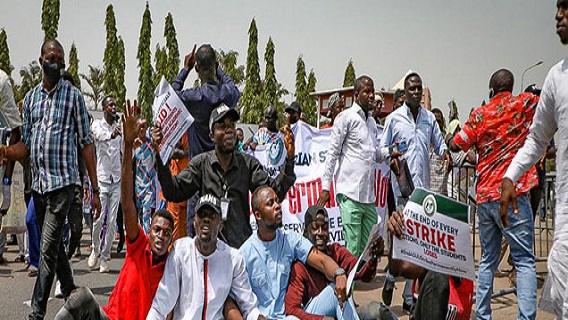 The Academic Staff Union of Universities has been on a seven-month strike, and the National Association of Nigerian Students, NANS, stormed Murtala Muhammed International Airport in Lagos on Monday, September 19. to put pressure on the government to end it.

The student body had earlier threatened to halt operations at domestic and foreign airports nationwide starting on Monday owing to the walkout.

Students were sick of appealing with both parties to stop the strike, according to Ojo Raymond Olumide, chairman of the NANS National Task Force on “End ASUU Strike Now.”

“Nigerian students whose parents created the commonwealth cannot continue suffering at home alongside our lecturers while the few who gain from our sweat and blood have their kids abroad.

“We call on students to rise and join us as we take our destinies into our hands. Our demands remain consistently clear and simple,” the NANS spokesman had said.

The situation caused gridlock along the axis as the vehicular movement in and out of the airport was stalled.

The spokesman for the Lagos State Police Command, Benjamin Hundeyin, disclosed that police officers have been deployed to the scene.

“They are here to protect us. Nobody has been harassed but we are not relenting. No retreat, no surrender,” he said.

Meanwhile, Charles Soludo, the governor of Anambra State, on Sunday, September 18, provided an explanation for why kidnapping and insecurity are rampant in the state.

He claimed that Anambra’s economic standing among South-East states made it a target for criminals.

Further, he said that his administration has implemented many measures to combat the threat. Soludo made this known in response to the recent uptick in insecurity in the state.

In an interview with Channels TV’s Politics Today on Sunday, September 19, 2022; Soludo said that Igbo people are the ones committing crimes in the state.

In addition, the former governor of the Central Bank of Nigeria asserted that, in contrast to popular belief; criminals are both known and not unknown because they are frequently profiled in the media.

Soludo said, “They are plain criminals. Some of these criminals also hide under the cloak of agitation but IPOB has repeatedly distanced itself from the criminals.

“They are kidnappers and plain criminals and they indulge in these because it is lucrative. Anambra is without a doubt the richest state in the South-East so this is the state where kidnapping has the highest value and so you will have their highest concentration here.