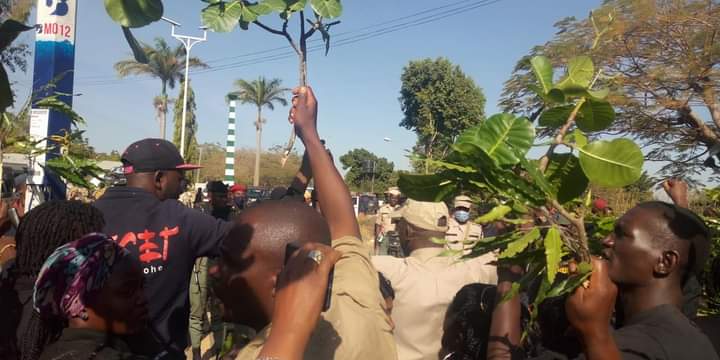 The National Union of Local Government Employees (NULGE) has debunked rumour and media reports suggesting that a soldier was shot during the recent unfolding between security agencies and protesting NULGE workers.

This position was disclosed following an emergency meeting summon at the instance of the Jos North LGA Chairman in order to find solutions to the incidents that followed the arrest and arraignment of protesters few days ago.

Speaking exclusively to Nigeria Star News correspondent, Comrade Danladi Dalek, NULGE Secretary, Jos North LGA debunked the rumour making rounds that there was a clash between security agencies and protesting LG Staff. In his own words “There was no clash, they only came and barricaded our freedom square, (the place in front of the State Secretariat Gate), where we usually gather there every morning 7am – 8am to pray and sing and peacefully ask for our rights”.

“We arrived there and met them in their numbers, it was like the entire barracks was brought to the place. They asked us to leave the place, we refused and told them that we usually gather there to press home our demand”.

“Suddenly, they started throwing tear gas at us, people started running, those who could run ran away while those who could not were apprehended. About fifty-three (53) people were apprehended and arraigned at two mobile courts, one at JMDB and the other at Kasuwan nama. They have been released after we fulfilled bail conditions”.

When asked if the stories were true that a soldier was shot by the protesters he maintained that “We are unarmed, harmless and peaceful protesters. We only have our banners and placards only”.

According to him “what happened there was that, as they were arresting our colleagues, the military men on bike tried to apprehend one of our colleagues, they had held him already by his trousers while he was trying to run, then suddenly he was able to detach himself from the grip of the soldier on the bike then the soldier fell off the bike, that was how he got injured”.

According to him, all those arrested have been released on bail and are due to appear on the 25th of February 2021 for further hearing on the case filed against them for unlawful gatherings.

Also corroborating this position, representative of the Medical & Health Union Jos North LGA and the Jos North Chairman of the Non- Academic Staff Union Comrade Peter A. and Daniel Musa respectively maintain that there was no clash between security agents and protesting NULGE, reiterating that the assertion that a soldier was shot is just an attempt to discredit the struggle.

It will be recalled that the Coalition of Rights Groups has issued a press statement berating the protesting LG workers for allegedly shooting a soldier.

As at the time of filling this report, the President of NULGE was unavailable to respond to our correspondent. According to our findings, he and his EXCO are currently attending their Nations Convention in Lagos