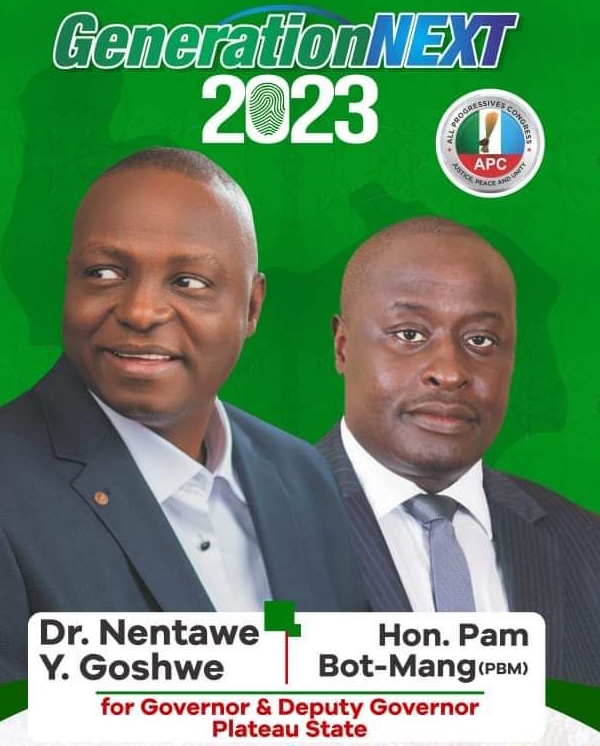 Governorship candidate of the All Progressives Congress (APC) in Plateau State, Dr Nentawe Yilwatda has picked the commissioner of Works in the state Hon Pam Botmang, as his running mate for the 2023 governorship race in the state.

Unveiling his running mate at the APC Secreteriate in Jos, after consultations with critical stakeholders in the state, Nentawe said I am happy to announce that I have picked Botmang as my running mate in the 2023 governorship election in Plateau State,” he said.

“I wish to therefore call on the good people of Plateau State to support the choice of Botmang as my running mate. I also enjoin them in coming out en-masse to vote for our ticket during the forthcoming 2023 general election.”

“Your mandate in 2023 will enable us to build a peaceful, prosperous, and greater Plateau State.”

Nentawe said zoning was critical as well as integrity.
He thanked the APC for finding him worthy as their Candidate promising not to let the party down

Nentawe said he is working towards uniting all members of the party in the state, so that it would emerge victorious come 2023.

Speaking earlier the Chairman of the party in Plateau Hon Rufus Bature, said the campaign for their Governorship election would be rancour free.

APC has the best Governorship candidate, and we would market him to the people of Plateau, he said everyone would be carried along.