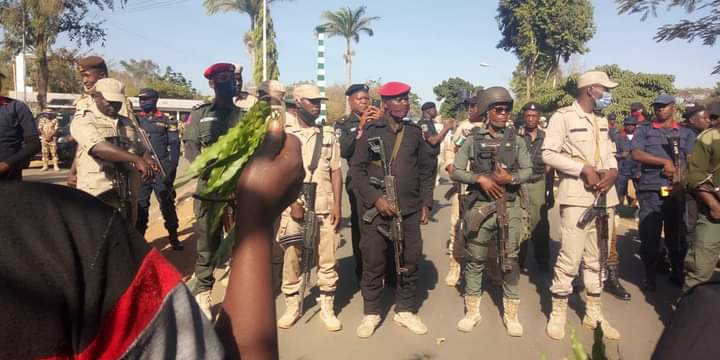 Plateau State Local Government Workers in recent turn of events clashed with the Military operatives who were instructed to dispatch workers from proceeding with the minimum wage protest in Jos, Plateau State.

The workers, who have being protesting for the past one month held a Christmas service at the protest Venue, Joseph Gwomwalk Secretariat Jos and had convened to the venue to continue with the peaceful protest but where forcefully dispatched by the security personnel.

“Today we are out as usual to agitate for the National Minimum wage which has been going on for over one month now but surprisingly this morning we came out and meet with hundreds of Soldiers who came to dispatch us.

“But we decided that we will not just go like that but to chants the victory songs. We want the State Government, the Federal Government and the entire world to here us and we are coming to the Secretariat because it is the engine room of the state

“Instead of the Government to pay it took us to court and brought a complete Military Barrack to the venue of our protest to dispatch us and we are not happy about that.”

“The Governor is supposed to enforce so that our money is paid because the minimum wage was negotiated and signed into law in February and they were supposed to pay us in March but was suspended because of COVID-19 to October.

“In October, instead of them to pay us the said amount, we sow N9,000 and that make the workers to come out in anger and in pains.”

Mrs. Semshak said the Local Government workers had a black Christmas due to pains and lack of salary and vowed that they will continue press home their demands until government act positively