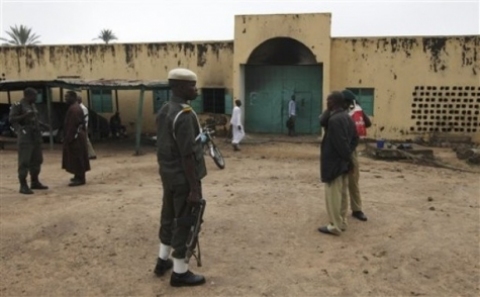 The Minister of Defence, Bashir Magashi says 64 Boko Haram suspects escaped from the Kuje Prison after the attack on the facility on Tuesday night.

Addressing newsmen after taking an assessment tour of the facility on Wednesday, July 6 the Minister said the attack on Kuje Prison started around 10:30pm with heavy gunfire and explosions.

He said they came in their numbers, gained entrance into the Kuje prison, and released some of the inmates who are now at large adding that some had been recaptured.

“Very soon, we will give you the correct figure of the inmates that were taken, aside from that, we are trying to see what we can do to ensure that all escapees are returned.

“The prison is accommodating about 994 inmates, over 600 escaped and many have been recaptured and brought back to the prison.

“Maybe by the close of the day, more will have been captured and returned.

“I think everything is under control and the people who came to do this activity, from the records, we believe they belong to a particular group.

“Most likely, they are Boko Haram members because we have a sizeable number of Boko Haram suspects in detention, and presently we cannot locate any of them.

“I think they are about 64 in the prison and none of them is available now, they have all escaped,” he said.

Earlier, over 600 inmates reportedly escaped following the attack on the Kuje Prison in the Federal Capital Territory (FCT) on Tuesday night.

Permanent Secretary of the Ministry of Interior, Shuaib Belgore, disclosed this while giving an update on the attack in a chat with journalists on Wednesday.

Belgore noted that Boko Haram terrorists, who came to rescue their members, were responsible for the prison attack.

He added that they were equipped with sophisticated explosives which aided their entry into the prison facility.

“The initial entry attempt was unsuccessful, then they attacked another section of the wall with higher-grade explosives which brought the wall down.

“The forces on the ground did everything they could to repel them but the number they came with was high which they were not able to defend against. They kept on fighting gallantly unfortunately the breach happened. Reinforcement came when they were halfway through it. They were eventually repelled,” he said.